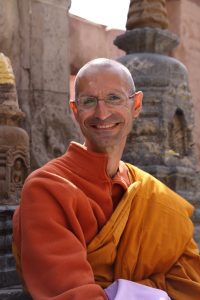 Venerable Phrakhrubhavanabidhan (Phra Ajarn Ofer Thiracitto) is a monk who has been practicing Vipassana meditation since 1989, first at Wat Rampoeng under the guidance of Luang Poh Banyat Akkayano, thereafter at Wat Phradhatu Sri Chomtong Voravihara, under the instruction of Most Venerable Phra Prom Mongkol Vi (Ven. Phra Ajarn Tong Sirimangalo). Both temples are in Chiang Mai, Thailand.

For several years Venerable Phrakhrubhavanabidhan (Phra Ajarn Ofer Thiracitto) taught meditation in Israel before he ordained as a monk in Thailand in 2001, followed by several years as monk and meditation teacher at a Buddhist temple near Frankfurt, Germany.

He was awarded the “Annual Benefactor of Buddhism Award” for his service in the Dhamma by the Sangha in May 2010 in Chiang Mai, Thailand. Another award followed in May 2011 in Bangkok by HRH Princess Maha Chakri Sirindhorn of Thailand, the award of the “Sao Sema Dhammacakka” (also known as the Golden Pillar of the Dhamma) for benefactors of Buddhism, awarded for introducing and spreading the Dhamma abroad.

Since 2005 Venerable Phrakhrubhavanabidhan (Phra Ajarn Ofer Thiracitto) has been teaching in his native Israel as well as in various places around the world. Most recently, he was promoted to the Thai monastic hierarchy in 2013. 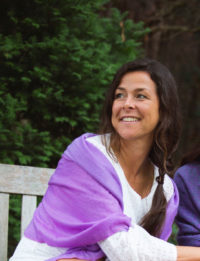 Carmen is originally from Suriname but has spent most of her life in the Netherlands. She was first introduced to Vipassana in 2007 and has been practicing in the tradition of Most Venerable Phra Prom Mongkol Vi (Ven. Phra Ajarn Tong Sirimangalo) intensively ever since.

Several extended stays in the International Vipassana Meditation Centre at Wat Phradhatu Sri Chomtong Voravihara, Thailand, have led to her being authorized as a teacher by the Most Venerable Phra Prom Mongkol Vi (Ven. Phra Ajarn Tong Sirimangalo) in 2018.

Khun Thanat has entrusted her with organizing meditation retreats in the Netherlands and ultimately establishing a new meditation center. She has been organizing retreats since 2015.

In 2019, Carmen received recognition as a benefactor and was awarded by the government of Chiangmai for her services to Buddhism.